This is what we’re gonna do. We’re gonna talk about TV.

If I ever had to live in America, one of my great consolations would be the potential for going to baseball games. I love that game. As many of you know, since this blog is largely read by people who know me, my two childhood best friends remain my constant companions. We’re awful nerds and so call ourselves the Triple Entente. One balmy summer evening too many years ago to remember, the Entente, joined by Wife-Unit and two native Oregonians, attended a game of minor league baseball.

A sport for kings that is! Designed for optimum drinking. Played at dusk when everyone is at their most attractive. Loaded with statistics for those of us who are friends with numbers. Being able to spend the summer following a local baseball team would more than make up for the crappy bread in America.

But now, much to my surprise, I love American Football too.

Previously my knowledge of American Football had been gathered from Madden 93 for the Sega Megadrive. I asked my parents to buy me Lemmings. They bought me an American Football game with a fat man on the cover. How’s that for being born under the wrong sign?

From what the games console taught me, the key to winning in American Football was to always play as the Buffalo Bills and to do something called a “Hail Mary”.

Now I know what a “Hail Mary” actually is because I fell in love with the hugely under-rated programme Friday Night Lights.

It is about the life and times of a small fictional east Texas city called Dillon, told through the lens of its high school American football culture. When I tell people that they look at me with what we can call the “Firefly” face. That’s the face evoked by being recommended to watch a tv programme that is a “Western but set in space”.

But actually underneath the teen soap, testosterone charged football arena surface, Friday Night Lights is an expressionistic wonder. Over the course of its five seasons it plays out as a kind of extended musing on one of the great philosophical questions: is it better to be effective or to be excellent?

See why the sport plays a part? Life is like football and we have to decide if we want to win or be good and those are not necessarily the same things.

The plot always hinges around Coach Eric Taylor and his wife, a high school guidance counselor called Tammy. Eric and Tammy always wear reflective sunglasses but you never ever ever see the camera or boom-mic in the lenses and that is a hint towards the stratospheric production standards maintained in this show. It has a kind of documentary style shooting that is unobtrusive but very effective. I could waffle about that but won’t. It is high quality telly.

Plus, in its depiction of this married couple as they struggle through the compromises and consolations of living together, you have the rarest of things: a believable depiction of what it means to be husband and wife. 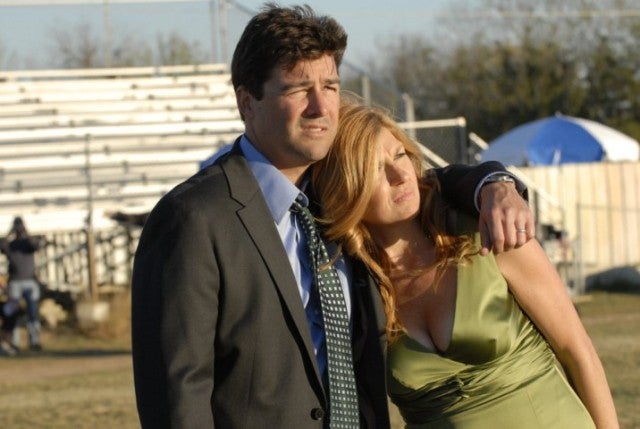 It helps that they fancy the pants off each other. I hate how marriage is commonly a trope for sexual dissatisfaction or monotony.

There is some stellar acting and some utterly shite acting. There is occasionally a slip into Dawson’s Creek territory infuriating dialogue and teenage romance. There is a very strange plot tangent in series two that comes out of nowhere. This is not perfect telly. But it is deeply satisfying. It is full of total hotties so at least on that level it will always work. Plus it doesn’t take itself too seriously. It gives some space to considering the way in which the Christian faith shapes American culture without viewing that totally negatively. It depicts the elderly with dignity. The soundtrack is superb.

So too does her husband. And as the show comes down heavily on the side of excellence over effectiveness, one of the unspoken undertones is the way in which their virtue spreads. That’s some moral complexity from American pop culture. That kind of thing needs to be encouraged.

So go watch Friday Night Lights and try not to fall for Timmy Riggins.

2 Replies to “In Honour Of Friday Night Lights”