Although a series of long winded, poorly structured posts about one of the most intractable conversations in western politics was unlikely to change the world, I have enjoyed bashing out my frustrations in these posts.

First I tried to argue that religiously motivated political positions are not just inevitable but they can actually be meritable. It is a poor-show power-play to try and remove pro-life voices from the public square on the basis of their “religious irrationality”.

Secondly, I sought to explain what Christians mean when they say the Bible informs their pro-life position.

Thirdly, I challenged the idea that Christianity and by extension pro-life positions advocated by women were inherently misogynistic.

Thanks to those who have emailed and commented and tweeted responses, echoing or challenging what I have written. I enjoyed the interaction more than the hastily composed pieces themselves.

In this final section I want to turn my attention to what is fundamentally wrong with my position.

Implicit in my discussion has been the expectation that Christian belief leads to being pro-life. That of course, is empirically false. There are lots of Christians who are pro-choice. But rather than get caught up with the black swans, I have tried to operate out of the vast majority of Christian reflection on the question. Engaging the theological pro-choice arguments would be very interesting but a blog probably isn’t a good place to do it.

In this post, therefore, I am addressing those Christians who are pro-life and have a theological justification for that position. If there is any connection between your general belief in God or your occasional religious practice and your political convictions about abortion, I am talking to you. If you have a nuanced, thick, complex belief about God (as an example: God is Triune) and/or if you have somewhat more considered religious practice (as an example: regular worship service attendance along with prayer and Bible study and all the things that makes one a SERIOUS CHRISTIAN in the eyes of the ultimate judge, the sociological survey), then I am talking to you. And regardless of where you find yourself, if you find me talking to you, I am talking to you today in my concerned, wise, somber Pastor-voice. You know the one? The one where I lean into the mic on the pulpit, as if to say, “I don’t want to have to say this, this is bad news, but you need to hear it.”

If we think that being pro-life means going on protests, writing weird letters and ticking a ballot paper every couple of years, then we are fools of the most careless and reckless sort.

Pro-life positions express themselves politically because as I have tried to show, abortion is not a private decision.

But that does not mean that the realm in which our pro-life positions are articulated is primarily political. In Ireland, we have spent the last three decades having political conversations about abortion, we have had referendum ballots and supreme court decisions, and bills discussed in parliament. In all the ways that politics can happen, it has happened. The only way you can describe Ireland as being politically “inactive” on the abortion question is if you are preloaded to only accept full capitulation on the part of those with an opposing view.

And in all those years of organising and lobbying and protesting and voting, thousands of abortions have continued to happen, it is just that the deed itself occurs off-site, so to speak, in the UK.

I say that pro-life is in part about abortion because it is also about stem cell research and IVF, it is also about euthanasia and the prevalence of suicide, it is also about the death penalty and the construction of tools of death in Ireland, it is also about what we let American soldiers do at Shannon Airport and what our soldiers do. If we are going to be pro-life, let us protest against homelessness, in favour of prison reform and about environmental standards.

I say that pro-life is not about making abortion illegal but unneeded. When I say this, I worry if I am being too soft. But the fact is that few people are in favour of abortion. Most abortions occur because of tangible and resolvable factors at play, informing the choice of those involved.

Forget voting and lobbying and protesting if Irish Christians are not spending money, time and energy alleviating the causes that create a context for abortion.

A true pro-life position would be one where Christians were ensuring that a woman would never choose an abortion for economic reasons. What that requires is a social structure that supports the emancipation of women from the economic subjugation they fall into if they try to go it alone as single-parents.

A true pro-life position would be one where Christians were ensuring that a woman would never choose an abortion out of a lack of support. What that means is that local church communities have to deconstruct any taboos around sexuality that would give rise to shame or any other phenomenon that would hinder someone coming for help. More basically, church budgets need to make the margin space required so that they can provide the very real, material supports needed.

A true pro-life position would be one where Christians, reflecting on how they understand themselves as the adopted children of God, would commonly adopt and foster children. Adoption in the Irish church is the last port of call, what couples in their late thirties do when they can’t give birth themselves. I know this from experience. When my Wife-unit and I (who are to the best of our knowledge, perfectly capable of fertility), told people we had begun the process of adoption, people’s common response was, “Oh, I’m sorry.”

As long as thousands of women call on abortion services in the UK, how can we pretend we are a pro-life country?

I’m a funny guy. You can trust this because I map out my prayers in the morning in a notebook full of the quotes of Chairman Mao. 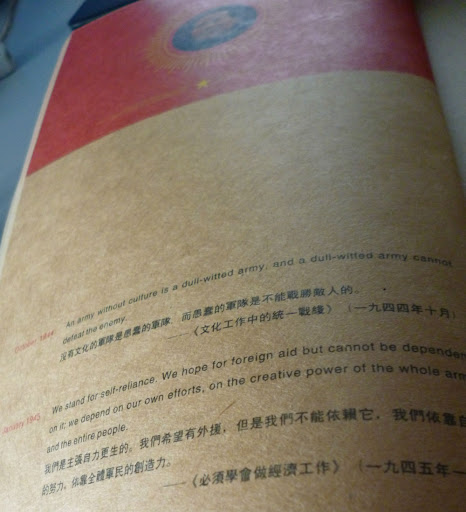 Political power grows out of the barrel
of a gun.

That man had some compelling ideas!

What is wrong with pro-life? It is insufficiently theological. If it trusted in God and sought to embody his Kingdom, it would forsake the dream that a bill of paper signed by some men in suits could protect, cherish and value life. Only the living can value life.

Vigils are good. Protests may even have their place. But if our pro-life practice is not founded on the sacrificial giving of our cash, our hospitality and our care, then it is worse than a burden placed on the backs of pregnant women. It is two-faced lie. Political power is the marshalling of the monopoly that controls violence to support our cause. For the kingdom of God is not a matter of procedure and policy, but of righteousness, peace and joy in the Holy Spirit.

Abortion happens. The world is fallen and so we should expect this.

The response to this fact cannot be burying ourselves under the comfort blankets of half-truths but a whole-hearted commitment to the eradication of the material factors that create the desire for abortion.

What is wrong with pro-life? It is insufficiently theological. It doesn’t embody God’s love but trusts in man’s structures. As long as it insists on this path, it will fail.

Your Correspondent, His TV is his lover, singing him to sleep, still there in the morning

One Reply to “Five Thoughts On Abortion: 5. What Is Wrong With Pro-Life”