It is fairly commonly pointed out that the whole Christians wearing crosses thing is kind of weird. A modern day equivalent might be a bunch of people declaring their zeal for God by wearing little cast metal Electric Chairs around their necks on chains. That the Cross was a deeply ambivalent symbol for Christians is evident from the fact that it took them a good 300+ years to start using it in their artwork.

However, a 3rd Century apologetic text by Marcus Minucius Felix has a strange feature to it. His book Octavius, was very influential at the time and it takes the form of a dialogue between a pagan called Caecilius and a Christian called Octavius. Caecilius is not impressed by these new-fangled followers of the Nazarene. His criticisms of early Christianity are interesting for a number of reasons, chiefly because of how shocking they are. He accuses Christians of incest, cannibalism, of canine-initiated orgies and of worshipping the genitalia of their pontiff. One presumes that since Caecilius’ words are actually written by a Christian apologist, the things that people were saying about the growing Jesus-movement included rumours even more bizarre.

Caecilius is utterly ignorant of any details about the life of Jesus. He is vaguely aware that Christians follow a criminal who was put to death. Fascinatingly, he also claims they revere the “fell wood” upon which he died. This is almost two centuries before Christians were confident enough to embrace the subversive symbol of crucifixion widely in their art and it was a good century before any myths about the “True cross” emerged.

Another strange thing occurs in the text. Octavius has his pagan, Caecilius, talk of how Christians worship a donkey. He says in verse 3 of chapter 9:

I hear, for example, that they do reverence to the head of that most degraded of beasts, an ass; I cannot imagine what absurdity has persuaded them to consecrate it, but it is indeed a cult born of such morals and well suited for them.

This must be a reference to perhaps the very earliest depiction of Jesus on the cross that we have. The depiction takes the form of graffiti. It is a crude line drawing of a man in worship, paying homage to a figure on a cross with a horse’s head. The scrawled explanation reads: Alexamenos is worshipping his god.

Now we have no dates for Ocatvius and no clear date for the graffiti. Let us imagine that Minicius Felix composed his dialogue in Rome, where the graffiti was discovered. We are still in the remarkable position of being able to link a drawing on a wall to a very influential later text. In an age before mass media, we must conclude that the anti-Christian graffiti was replicated. It must have been pirated, copied and spread around on walls all over the place so that it came to be a fairly common rumour that these strange Christians worshipped an ass.

Today we know from the work of Shepard Fairy and especially of Banksy that street art continues to have a popular influence far beyond anything that gets stuck in a frame and hung on a wall in some prestigious Venice gallery. So may I respectfully suggest that Christian artists start seriously committing themselves to breaking the law, breaking out the spray cans and bringing the message of the Kingdom to the people in a medium that seems especially congruent to the values that Jesus embodies.

Here is the best articulation of that yet: Jesus and the Crown of Thorns on Brighton pier, painted by someone who left their name unattached… 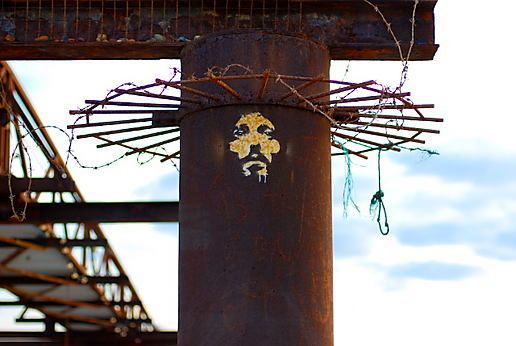 Of course I don’t actually mean that we should be teaching graffiti. After all, one of the elegances of theology is that it inculcates in people the ability to pursue their work in ways fitting to their intention. Hence, it is the devoted Lutheran, Donald Knuth, who published The Art of Computer Programming. Faculty sponsored subversion is oxymoronic. It would be boorish propaganda. My point, in precision, is that the media that good and decent Christians are most comfortable in – debates in auditoria, panel discussions on the radio, writing op-ed pieces for broadsheet newspapers – these are not the venues that leave an indelible mark on our mind. A scrawled icon on a wall may be worth more than all the words ever published by Irish theologians…

Your Correspondent, Will tell his Missiology students to speak softly, but carry a big spraycan

6 Replies to “Why Graffiti Should Be Taught At Theology Colleges”