Lying in bed last night, enjoying one of those moments of matrimonial bliss (you know the ones – that come from an hour of silently reading your novel beside someone else silently reading a novel), Wife-unit turned and asked me “Does anything else beside bread get described as ‘a loaf’?”

“A loaf of pigeons?” I helpfully proposed. “A loaf of turnips?”

I googled it this morning and the magic auto-suggest function gave me “a loaf of bread” and “a loaf of poetry”. 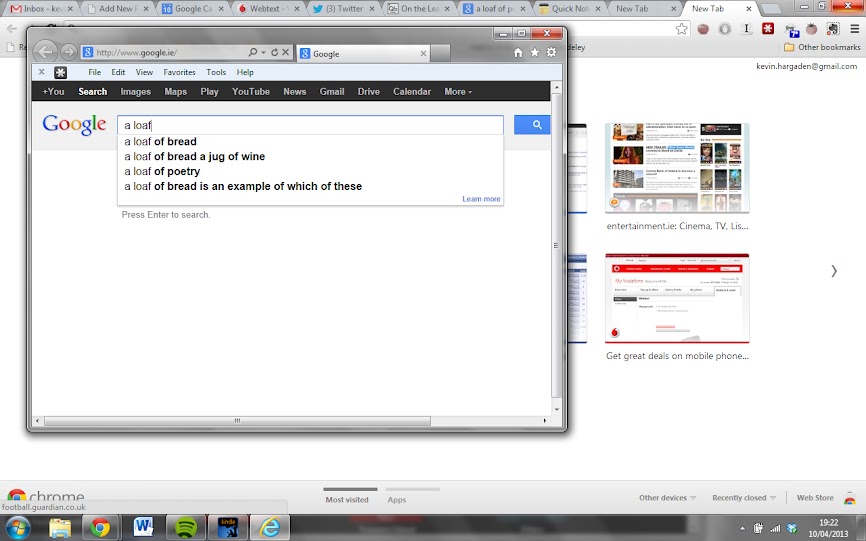 Don’t worry, I don’t use Internet Explorer, except when I want to mimic a result that Chrome has already amassed into its hivemind data-portrait of me. The particular poem “Loaf of Poetry” is fine. It is a little comparison between yeast-risen dough and making a poem. For a man hoping to do a PhD on the parables of Jesus, yeast-risen dough illustrations have to be simply divine to get my attention.

One of the things that I have grown to appreciate even more passionately as my hairline recedes and my hipness ratio diminishes, along with the unique satisfaction of infuriating my wife by making her laugh just before she falls off to sleep, is poetry. I attribute this new depth of appreciation to patience. Growing old requires spending more time with yourself. That time, if spent well, makes you more patient about things because you see more clearly how slowly you achieve the good.

Well, that’s my experience. Maybe you are so impressive you don’t even need to be patient.

That doesn’t sound all that impressive, actually.

People ask you questions on the internet that they would never ask you in person. Some of the questions I have been asked in person in the last few days include: “Are you staying for the wine reception?”, “Will you have another glass of wine?” and “Are you meant to drink that wine straight from the bottle?” But today on the internet, someone asked me to help him believe in the inspiration of Christian Scripture.

Although I have spent a lot of time thinking about the Scriptures and how they came to be and what it is they meant when they were being put together and what it is they mean now and all kinds of questions that would make me an interesting person to randomly be stuck beside on a long-haul flight if you liked obscure ideas, I have very little to offer someone on the internet who wants some short sharp answers to shore up something that gets called “faith”. I would have once relished such a task.

Today I almost dreaded it. The only thing worse than someone languishing in doubt about God is someone convinced by off-the-shelf frequently-asked-questions about Him.

Later in the day, (already) utterly exhausted, I started reading Christian Wiman’s book My Bright Abyss. Early on he writes:

Faith is not some half-remembered country into which you come like a long-exiled king, dispensing the old wisdom, casting out the radical, insurrectionist aspects of yourself by which you’ve been betrayed. No. Life is not an error, even when it is. That is to say, whatever faith you emerge with at the end of your life is going to be not simply affected by your life but intimately dependent upon it, for faith in God is, in the deepest sense, faith in life – which means that even the staunchest life of faith is a life of great change. It follows that if you believe at fifty what you believed at fifteen, then you have not lived – or have denied the reality of your life.

The book begins with a poem he has not been able to finish:

My God my bright abyss
Into which all my longing will not go
Once more I come to the edge of all I know
And believing nothing believe in this:

Wiman says what interests him now is not what to believe but how to believe it. (He believes in orthodox doctrinally fussy Christianity just like me, but he can’t settle there.) I think this is the heart of my apologetic aversion. I have a good grasp of the gnostic Gospels and can explain what actually happened at the Council of Nicaea and I can briefly outline the different ways different Christians at different times have considered the authority of the Scriptures. I have even managed to acquire enough knowledge to stumble through reading the blasted books in their original languages. But the end result of these years of study is not: “Look at all this pristine data at my disposal!” but “Thanks be to God that there is more to consider!”

I was once an apologist. The “what” of what I believed was that communicating truth propositions about the Gospel was important. But the “how” of that belief meant engaging with the life of Jesus in a way that rendered that first stage of apologetics irrelevant. The “what” led to a “how” which changed the “what”. This is not a redescription of losing faith or becoming “liberal” or settling for the wishy-washy. It is a movement. It is a journey. It is a pilgrimage. It is faith.

It isn’t finished yet.


Your Correspondent, Then he waddled away, ’till the very next day.

5 Replies to “Loaves of Poetry, Loads of Faith”