While I am heartened that JM is trying to kickstart a blogging renaissance in Ireland, I don’t know if my dozen faithful readers will ever get the service they deserve from Creideamh. After all, I can’t let any of my startlingly original research go out into the public because then it might be disseminated and I won’t get appropriate credit for it in academic journals, while delivering papers at conferences or chatting up girls in nightclubs.

The best use of the blog at this point in the web’s development seems to be as a venue to extend real life conversations. So when I blog quotes from books, I’m really looking forward to sitting down with Declan Kelly over coffee and when I write about shoes for poor children, I’m trying to make sense of my ramblings for Josh. Similarly, tomorrow I might have time to write about films I saw in 2013 and that is in response to a conversation I had with a friend who prudently remains blogless.

But here, instead of giving you a run down of my terrifically hip music listening (dominated in the last month by Christmas.FM and before that by replayed R.E.M. and Hold Steady albums), I shall share with you my mixtape. 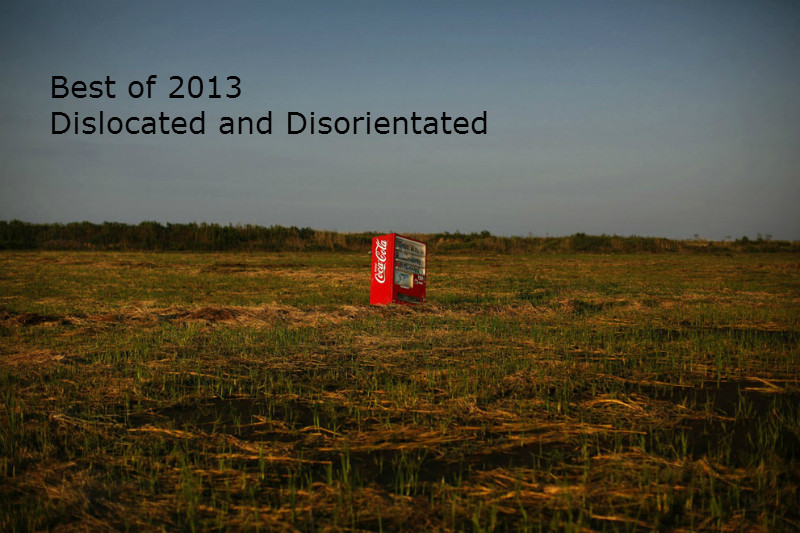 In my circle of friends, the Best Of project rotates around the following rules:

1) Playlists cannot exceed 80 minutes.
2) Playlists can be as short as you like.
3) Songs can be from any era but they have to be new for you in 2013.
4) Artists can be repeated, numerous songs can be taken from the same album.
5) Any and all genres are welcome, although the less evangelical Christian death metal one can fit on a CD, the happier we’ll all be.
6) Track listing, specially designed covers, annotated explanations for which songs have appeared and why are encouraged but not in any way necessary.

See how acclimatised I have become to Britain? Everything is more fun with rules!

The album can be downloaded from here.

Each number on the list links to a version of the particular song.

1. Arcade Fire – Normal Person: Lots of people were disappointed by the new Arcade Fire album, including important and relevant cultural commentators such as Noel Gallagher. I think the complaints about it being indulgent are well placed, but some of these songs get deep inside my ears and crucially, make me want to do jittery David Byrne style dancing all around the living room. This song starts the album because it has just that effect. Plus it begins with Win asking, “Do you like rock music? I don’t know if I do?”

2. Vampire Weekend – Unbelievers: The whiteness of this album is firmly established in track 2. Having begun with a Montreal based art collective, I move on to everyone’s favoured recipient of intellectual scoffing. Scoff away my friends, but the third Vampire Weekend also manages to make you want to scoot around the kitchen in your socks. This song is a sort of atheist musing on Pascal’s wager, which is fairly ambitious compared to the average hipster hit single.

3. Dawes – Hey Lover: Moving to Aberdeen has been a tough transition for Wife-Unit and I. The great consolation to me has been the friends I have made. One of the recurring themes running through these songs is how my Aberdonian friends have turned me on to entirely new loads of music. For my first meeting with my PhD supervisor, he took me out for coffee and told me to take a month to just read novels. He also told me about this band. I love this song, even though it requires considerable translation for it to apply to my life. With lyrics like “And when did I decide to grow this beard and gut?”, you really have to stretch it to see what relevance it has for me? After all, I still can’t grow a beard…

4. Trampled By Turtles – Where Is My Mind: At that same meeting, my supervisor introduced me to Tyler Atkinson. Tyler has sadly moved back to America but his music recommendations leave him a fine legacy in the Concrete Bunker. He told me about Trampled By Turtles, who have many fine songs that are not Pixies covers, but when a Pixies cover is better than the original, that has to be recognised in a best-of.

5. Josh Garrels – Rabbit & The Bear: Josh Garrels is the rarest of things; a Christian songwriter I am not ashamed to love. The man is prone to penning lyrics of real beauty and wit. As I read through boring, boring books about the history of the Irish economy, this Francis of Assisi style musing on the beauty of God’s creation always induced a smile. Forgive me while I get preachy (a mode I am in repeatedly on this Best Of) but there is no more beautiful thing to contemplate than that coming Kingdom “Where every creature sings ‘Oh Lord, you rescued us all!'”

6. Gungor – Beautiful Things: And I suppose whatever vestige of coolness has now just drained away because I have followed up one contemporary Christian track with another. Gungor are a bit of a phenomenon in the Christian world but I just discovered them this year. Again, they are renowned for writing songs that Christians aren’t utterly embarrassed to be found listening. Perhaps we should just get over ourselves? But this song passes the test for a song about God that bears re-listening. For one thing, it is about God, not just a projection of our feelings. And while there are more basic and more important things to say about God, the repetition of the truth that He makes beautiful things is a good one. Sing it to yourself while you brush your teeth and before long, you’ll know how to pray.

7. Goat Lonesome – Measure of Things:So I mentioned Tyler Atkinson earlier. Tyler, on top of being a damn fine theologian, was also the best thing about the music scene in Aberdeen, which makes his return to the Carolinas all the more sad for us. He and his Scottish buddy made up “Goat Lonesome”, who gigged around the bars of the city. Tyler wrote his thesis on the Jewish wisdom literature we call Ecclesiastes, which among other things muses on the nature and experience of time. He does an astonishing job of compressing this 2,500 year old piece of practical philosophy into a three minute song.

8. Radiohead – Gagging Order: My brother has to work extensively in China and Japan and sometimes he comes home bearing gifts in the form of obscure releases I’ve never heard of from bands I love. This year I got this Radiohead release called Com Lag and this song is the middle of the album. For a year when society crossed some strange event horizon of anesthetized surveillance, this “Move along, there’s nothing left to see” is haunting.

9. Public Service Broadcasting – Night Mail: “Eight-thirty p.m., weekdays and Sundays, the Down Postal Special leaves Euston for Glasgow, Edinburgh and Aberdeen.” So there is an elegant transition (hopefully) to this classic track from a band that composes music around sampled public education filmreels of the past. Since The Simpsons have been skewering public educational efforts for decades, we should all know by now that the point of these films (or the modern versions in the form of gory road safety advertisements and public health advertising on billboards) is not education but discipline. From Gagging Order to Night Mail, we’ve got a sort of musical journey back to where the strange world we now live in began…

10. Frightened Rabbit – State Hospital: … and this song is a portrait of how that weirdness works out in the specific place I now live. My flat is in one of the worst areas of Aberdeen. All around us we see the tangible effect of decades of neo-liberal experimentation on the working class. “A slipped disc in the spine of community … She cries on the high street just to be heard, a screaming anchor for nothing in particular.” I was alerted to Frightened Rabbit by an internet friend who maintains a blog that is worth following called Invisible Foreigner. As Scott Hutchison sings “All is not lost” as a closing refrain, this song can serve as an anthemic companion to the time I’ll live here in Tillydrone.

11. Tegan & Sara – I Was A Fool: This album is getting too heavy. Now is the time for pop music. Tegan & Sara’s very 80s inspired pop record is a triumph. After all that cod-philosophising I just did there, and the theologising before it, very little needs to be said about this song except that it is really good.

12. Miley Cyrus – Wrecking Ball: And the less said about this song, the better. I had not heard the original version and was about to put a cover by London Grammar on this album when Wife-unit advised me to go listen to the Miley version. It is a phenomenally great song. I watched the video too and it made me feel strange in a sour milk sort of way. But Taido stuck One Direction on his best of, so I’m allowed have this, ok?

Wife-unit has just heard this song and come out to lecture me, saying, “Your refusal to listen to radio means you miss out on songs like this!” Perhaps my New Year resolution should be to listen to broadcast radio?

13. The National – Sea of Love: If I stay here in the land of radio pop, trouble will find me. So now we resort back to standard middle-aged person music transmission.

14. Neko Case – Man: But if we’re going to have lots of middle-aged person’s music, let’s make it the cooler variety. Neko Case continued her impeccable career with a superb album. While the heartbreaking “Nearly Midnight, Honolulu” could have made the list, to mark a year when I have been thinking extensively about gender and the problems it represents, this is the perfect song.

15. Billy Bragg – There Will Be A Reckoning: I caught myself yesterday describing Bruce Springsteen as “America’s version of Billy Bragg.” If such a thing exists, that probably is a cardinal sin. But Bragg’s album arrived early in 2013 and probably wins the award as my favourite of the year. I could easily have thrown four of his songs on here, but I chose this one because it is true and getting truthier. The UK seems intent on devouring itself with racist fantasies. While London financiers pillage the state, the people are fed dark fairy tales of foreigners robbing their way of life. The self-fulfilling nature of these violent myths of invasion from Bulgarians, Romanians and Muslims is going to incite a conflagration. In the coming year, politicians will have to rediscover ethics or Bragg’s song will move from prophecy into history.

16. Mavis Staples – I Like The Things About Me: Mavis Staples’ new album, produced by that chap from Wilco, is a brilliant piece of modern gospel. If There Will Be A Reckoning is a song that is true about the society in which I live, I Like The Things About Me is a song about the person I am who lives there. I like the things about me that I once despised and I am glad someone wrote a song about that.

17. Everything Everything – Don’t Try: I put Arcade Fire and Vampire Weekend on here. Now I finish with Everything Everything. If only Coldplay had released an album, I could have put the four most hateable bands around on here! Everything Everything seem to annoy a lot of people but I think they are great – smart and witty and catchy. This seems like an excellent way to end the best of. Don’t try to fight it, it will wriggle into your ear eventually.

Album can be accessed here.

Your Correspondent, He built this city on rock and roll