One of the least innovative things about our collective arousal at the world-transforming achieved by job-creators, tech-innovators and industry-disruptors is how old-fashioned it is. Today we sigh with an almost sexual longing when the titans of industry offer pronouncements on the nature of reality. Steve Jobs’ product announcements are probably taught in homiletic classes around the world. Bill Gates is such a sage that he is single-handedly trying to change how America does school. Zuckerberg sustains a massive lobbying organisation, while quietly competing with Bill and Melinda for the title of Philanthropist World Champion. Let us not forget Larry Page who wants to create space where law doesn’t have influence so that he can accelerate innovation.

But in the 1920s Henry Ford was as bold and cocky in his optimism that his philosophy would slowly, gradually, little by little bring about a utopian society. The cutting edge masters of the technological age mimic the social hubris of that famous old anti-Semite. They all share in common the delusion that their overstuffed wallets indicate some ontological wisdom. They win at making money and if only we let them decide our community tactics, then we’d all win at politics together. For Ford, success was bound up with hygiene and vegetarianism. We can speculate that Page and Zuckerberg are more likely to advocate innovation and low-carbs but the fact remains that a strange feature of mature capitalism is the elevation of the titan of industry to the role of high-priest of anything that takes their fancy.

This has been hammered home to me over the last few nights as I finished reading Greg Grandin’s excellent and very readable account of Ford’s massive Amazonian civilization project, Fordlândia. In 1928 Ford established a subsidiary in Brasil that took control of 10,000 km2 of the Amazon. Ford was convinced that the Dutch and British governments were going to create a rubber monopoly and so he sought to rejuvenate the rubber industry of South America to assure his Michigan factories a ready supply of tyres. The project was effectively nationalised at the onset of World War II, after spending tens of millions of dollars, building two towns and failing to ever generate anything close to profit. The settlements are now abandoned, in the large part the land has been retrieved by the forest and what is still navigable is dedicated to ad-hoc cattle rearing and industrial soy production.

The lesson of the failed Fordlândia project was not, Grandin concludes, a misplaced idealism about the power of the human will to subdue nature in the form of the Amazonian basin. Of course, there was a glorious, tragic under-estimation of just what it would mean to “civilize” the largest forest on earth. The story that Grandin recounts about the “bonfire of the caterpillars” especially captured this for me:

The company mobilized Belterra’s whole population to respond to outbreaks. During on early caterpillar assault on a block of the first trees to be planted on the estate, “every available person, men and women, was lined up to do an effective handpicking.” In five hours, they collected an estimated 250,000 caterpillars, filling fifty one-gallon containers. When no more caterpillars could be found, they emptied the containers into a pile, threw gasoline on it, and torched the pyre.

It was ultimately all in vain because the caterpillars and tree fungus, the lace bugs and red spiders won in the end. But for Grandin, reading the failure of Fordlândia as a real life Heart of Darkness parable is to mis-read it. The misplaced faith behind the project was

the faith that a drive toward greater efficiency could be controlled and managed in such a way as to bring balance to the world… The arrogance, though, is not that Henry Ford thought he could tame the Amazon but that he believed that the forces of capitalism, once released, could still be contained.

The two Ford settlements, Fordlândia and Belterra, were fed by the two largest local (a very relative term considering the distances and density of forest and torrent of river water at play here) cities of Santarem and Manaus. Grandin’s reading closes with a lament for what unleashed, savage capitalism has done to Manaus. Long after Ford and his fellows fled, the military regime of 1960s Brasil declared Manaus a free-trade zone. Grandin explains:

the military government provided subsidies and reduced export taxes to stimulate industry, turning the city into one of the world’s first brand-name assembly zones similar to the Mexican maquilas that were then beginning to press against the the southern border of the United States. Today, Manaus’ industrial parks are home to about a hundred corporate plants, including Honda, Yamaha, Sony, Nokia, Philips, Kodak, Samsung and Sanyo. In 1999, Harley Davidson opened is first off-shore factory in the city. Gillette has its largest South American facility there. When a consumer in Latin America purchases a DVD player, cell phone, TV, bicycle, or motorcycle, there is a good chance it was assembled in the middle of the world’s largest tropical forest.

If that sounds positive to you, you need to check yourself because the propaganda of a previous age still finds a fertile home in your soul. That reality demands Grandin’s next paragraph:

The city bursts out of the Amazon like a perverse Oz, steadily eating away the surrounding emerald foliage. Like many other Third World cities, Manaus is plagued by rising poverty and crime, child prostitution, gridlocked traffic, pollution, and poor health care. There is no sewage plant in the city, and its waste flows untreated into the Rio Negro.

Ford was the innovator-extrordinaire of a century ago. He set in motion a machine he was convinced could bring peace to the world by fostering mutuality and trust between communities, counties and countries. He also set in motion a machine of production that tore apart the world he most valued and so in his closing years he became increasingly paranoid and depressive. The Amazon project stopped being about rubber and started being about a failed attempt to halt the very processes of control he could no longer control. Those processes – assembly lines, replaceable parts and replaceable staffs, routined and specified supply systems and a preoccupation with “innovation” – are all clearly on display in the Sony factories and Nokia warehouses. There is one thing that is decisively no longer at play. Ford believed capitalism demanded high pay. Workers can only become consumers when they have money left over at the end of the month and a reasonable hope that next month will bring more money. The workers in the Amazon don’t have such certainties and can’t even hope for them.

It turns out that markets operate at scale too. As long as the elite at the top is numerically large enough, consumer goods will find a market, regardless of the real inequality on the city streets. Ford wouldn’t need to pay those men such high wages if he lived in a society so systemically unequal that the rich could always spend, safe in the knowledge that they would always be rich.

Now if all this seems strangely familiar to you, it is because Italy will play England on Saturday night in the new 44,000 seat stadium in Manaus. You have heard news reports about the expensive measures both teams are going through to prepare themselves for competing in humidity that makes competition a difficult idea. There is no football team playing at a level that requires a 44,000 seat stadium in Manaus. It will be used four times during the upcoming World Cup and then it will fall into ruin, like countless stadia in Greece after the 2000 Olympics or wherever a Winter Olympics has been held. The stadium cost $270 million. The Brasilian government as a whole is spending $11 billion on hosting the 63 games of the World Cup. FIFA will make a little bit from the whole endeavour but one can’t help but side with the growing number of Brasilian protesters. 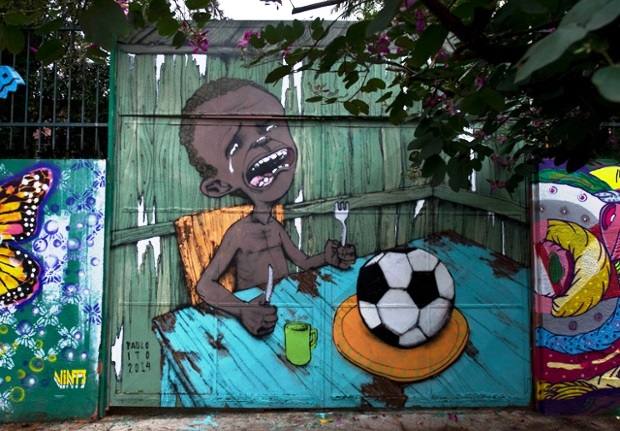 And yet. I will watch every game that timezones, deadlines and relationships will permit me to watch. I will hope Messi stops dry heaving long enough to cement his place in history as the greatest footballer ever. I will hope America somehow brave it through to the second round. I will hope that Belgium win the whole thing. And I will try not to think about connecting the dots between ideologies of capitalist utopia, cheap consumer goods, cheaper wages in places I never have to visit and the certain knowledge that every tyranny is happy to roll out bread and circuses to support the system.

Your Correspondent, He gotta work till he sweats poison

2 Replies to “Manaus, Bread And Circuses”