It is an uncommon children’s movie that deals with questions of legacy, the appreciation of artistic genius, the moral abomination that is war, the decency in tinkering with things and most of all the magic of movies but in Hugo we have the film that does all this, ends by honouring the book as the chief of all art forms and should by rights have won the Oscar.

Your Correspondent, It even has better silent movie scenes than The Artist

This is our generation’s Driving Miss Daisy.

Your Correspondent, Completely underwhelmed and not just because the dialogue lacked sparkle.

This movie is a surprisingly good fresh take on superhero myths and an excellent parable about the scale of fury contained within a human being who has been abused as a child.

Your Correspondent, He will not instigate revolution

The complex emotional life of a horrible person rendered beautifully and interestingly to slightly less than critical acclaim.

Your Correspondent, Fluent in the “Pizza English”

The complex emotional life of rich people in Hawaii rendered simple and uninteresting to critical acclaim.

This fucking amazing film hammers home, yet again, that contemporary education systems make no mistake more commonly than to expose children to the works of William Shakespeare too soon and hence dampen their reception forever.

That which the science trusting John says “will be the most beautiful sight ever” turns out to destroy the world. Claire is obsessed with being happy and will spend any amount of money to achieve it on behalf of her little sister, Justine.

Justine is so utterly depressed that she can’t bring herself to bathe, to embrace her husband on her wedding night, or take the promotion offered to her at the advertising agency where she is a feted success. Yet he is the only one, who cries over her favourite meal, sobbing “it tastes like ashes” that is able to face the cataclysm when it comes.

This is so perfectly the anti-Tree of Life that it boggles the mind that it was made at the same time. It could easily be taken for a tedious bore. It deals with questions of what reality is for, if anything at all. But while Malick’s movie is about the dance of grace with her children, Von Trier’s movie is about the dance of death of a hostile universe, where “the earth is evil, we don’t need to grieve for it, no one will miss it”.

Justine’s childhood involved a love for Abraham, a horse, her steadfast companion. At marriage, she forskaes him for her husband, who promptly leaves her. He cannot fulfill her after all. He has become hard to maneuver and irrelevant. She must be shouted at to even take the horse out, she takes to beating him in her frustration. 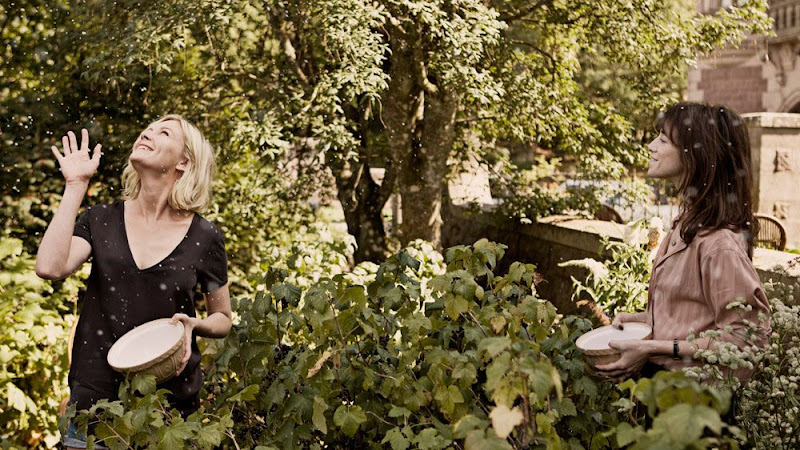 Grace can still be found, in the flight and song of birds and the fall of blossoms but it means nothing. Abraham, family, marriage… nothing provides a framework that allows sense to be made.

Your Correspondent, Super-gay horses are one of the signs of the apocalypse!

You know you are getting old when a movie that sets out to evoke how deadly it was to first kiss the girl you’ve fancied for ages as a teenager leaves you gleeful with reminiscent delight. Your Correspondent, Don’t ask how, just know that he’s more powerful than ever

Listen, I tell you a mystery: We will all sleep, and we will all be changed– into godless fecking Commies.

Your Correspondent, He lives to suck another day.

I have thus far seen 101 movies this year, which is a poor showing for a man with a lot of spare time and no kids. There is one movie that is awful, two movies that were surprising and three movies that I am deeming the best. Of course, I hope to be off to the cinema again before the end of the year so maybe Mission Impossible Ghost Protocol will amaze me.

Truly Awful
Sucker Punch may be the worst thing humans beings have ever made. Probably is. Scientists at CERN may call a press conference about it soon. It is morally bankrupt in a way that is hard to explain. An utterly deplorable movie. May it languish in the utter failure that it has deserved and may fewer and fewer people ever be exposed to its manipulative and exploitative trash in the future. Avoid this shite.

Surprising Movies
Jane Eyre is not the kind of movie that I would typically get excited about but it is was a masterpiece. I knew nothing about the plot and its strong female lead, portrayed brilliantly by Mia Wasikowska was utterly surprising to me. I was expecting a light frothy piece about how silly women are and how it will all work out in the end for the landed gentry. What a fool I was! The fecking plot is amazing. I love this movie. Go see it!

The second surprising movie for me was Another Year, which looks like an awful full-of-it movie about middle class English people being all middle class and boring. In fact it is a touching film about ageing, friendship and the value of simple pleasure. The performances are astonishing and the script is totally convincing. A lovely little masterpiece.

My Favourites Of The Year
In pure and simple terms, Hanna is my favourite movie of the year. It is a gripping, heart-pounding adventure movie, a prime example of the best of modern cinema. This movie couldn’t have been made ten years ago, never mind fifty years ago and it is superb. The soundtrack, the design, the acting, the pacing; all of these things contribute to the phenomenal momentum of the movie. Plus, a wee Irish girl stars and is charismatically brilliant in it.

The best movie of the year is Black Swan. It is difficult watching but it is a movie that will last for generations to come. I can’t say it was enjoyable but it was worthwhile. There were horrible scenes but the end-effect was deep empathy for mental illness and a conviction that if I ever have daughters they can do anything but ballet!

But the movie that I was most captured by this year was Tree Of Life. I spent the first twenty minutes sobbing at the grief of the mother, representative of Grace. The roller-coaster continued throughout all the 16 hours of film that followed! I too wish the raptor hadn’t shown mercy to his prey. I too wish that the scenes of star formation could have been cut shorter. I desperately wish that the final scenes on the Distant Shore looked less like a Halifax advertisement. There is so much to quibble with but it would all miss the point because there has rarely been a movie as ambitious in scope or as successful in telling the story of how not just the characters but everyone who has ever lived is raised by the Father Law and the Mother Grace, indeed the whole Cosmos is forged in the dialogue between those two mutual forces. Your Correspondent, “The only way to be happy is to love. Unless you love, your life will flash by”